page contents
Home / Dubai Attractions / Fujairah Travel Guide, Things to Do in Fujairah
Your travel guide to amazing Fujairah, UAE. Know stunning things to do in Fujairah. All information you need to know about Fujairah city hotels, map and beaches.

Fujairah Travel Guide, Things to Do in Fujairah

The glorious sandy beaches in Fujairah overlook the famous snoopy rock, an island shaped like the cartoon character Snoopy. Around the snoopy rock, you can go snorkelling and even take a short diving course at some resorts like Sandy Beach Motel. At there you can see the magical sea life which includes beautiful exotic fish, rays and maybe even catch a glimpse at the harmless Black-Tipped reef Shark which can grow to 6ft long!

Fujairah is to be found at the eastern extreme of the United Arab Emirates along the Gulf of Oman. The UAE is nestled between Saudi Arabia and Oman with the Arabian Gulf, making up half of its borders.

For most of the tourists or travellers, whos visits UAE Fujairah is one of the fascinating places and has a lot of attractions and activities to offer.

A paradise for watersports enthusiasts of all kinds, the warm crystal waters harbour a marine life abundant in variety, making it particularly suitable for diving and fishing.

For the more adventurous, off-road driving through the desert and boulder-strewn wadis provide vistas unrivalled in the country as startling emerald green date groves nestle between the towering Hajar peaks containing some of the oldest rocks in Arabia.

Powerboat racing world championship is one of the most engaging activity, hosted in Fujairah every year in October and organized by Fujairah International Marine Club, and the Bull Butting, which is also one of the considerable attractions in Fujairah can be seen every Friday.

The best time to visit Fujairah and adore its attraction is between October and May when the weather is not very hot. The hottest time when the temperature rises at its apex is from June to September with little rainfall.

Established in 1987, and since it’s the operation, the airport played a vital role to link Fujairah worldwide and to develop tourism, the airport designed to take it into the next century.

Fujairah has established a modern new highway network which links the Emirate with other sister’s Emirates plus excellent internal roads inside the city of Fujairah.

Fujairah’s unspoiled natural beauty and have all lovely faces of rich and beautiful nature. Fujairah has mountains, waterfalls, oases and long beaches and more than 30 broad valleys in addition to several smaller o­nes. Fujairah is the land of water sources, cold and warm.

A 50-hectare park and resort for families is a popular park in Fujairah. Ain Madhab Park looks like a green carpet with the grass and many kinds of trees and flowers planted.

the spring water temperature approaches 60 centigrade, Over 20 km southward of Fujairah, in a hills area, and it is visited by sightseers and cure seekers from ailments like rheumatism, backache and arthritis.

The huge and one of the most extended valley springs from Masafi area and travel 30 km to the dam.

8 km off the coast an located in Dhadnah area, Wadi Zikt dam is o­ne of the largest in Fujairah.

A significant tourist attraction for its lovely scenery, 42 km to the north of Fujairah.

In Wadi Al Wurayah. The beauty of waterfalls amid in of lovely scenery.

Almost 45 kilometres off the capital of Fujairah, can be reached through rough mountain routs.

About 49km north of Fujairah springs from Masafi and travel to Al Zaid and Umm Al Quwain.

This waterfall is coming from o­ne of the springs in Masafi to Wadi Siji.

Most renowned Wadi in Fujairah, Springs from Al Hail and travel 15 km in the south-west of the Emirate.

Dibba Al Fujairah, considered of the antiquated recorded human progress zones in the UAE. Dibba lies in the far northern outskirts of Fujairah where the beachfront fields are fruitful, and freshwater is bounty. Dibba is known about its numerous old manors, strongholds and remains. History of Dibba returns to the times of early human advancements when it was a significant business focus during the Phoenician time frame.

Al Bidya city considered as an essential human residence and settlement area all through the old history. Situated 38 km north of Fujairah City and 25 km of Dibba City.

Al Bidya Mosque o­ne of the most important archaeological sites in Fujairah is surrounded by Al Bidya castle.

Masafi is located in the Hajar mountains o­n the crossroads of the highways to Fujairah and Dibba. These mountains are well known for its freshwater springs, which provide water for vast orchards.

A broad Friday market has created close Masafi, with articles as assorted as vegetables, foods are grown from the ground plants, woollen rugs, sweet floss and simmered fresh corn, toys and things of stoneware. A large portion of the natural product is imported, yet a part of the vegetables are developed locally. The earthenware is based o­n neighbourhood structures.

Qidfa is a village which lies 18 kilometrE north of Fujairah along the coast road. Qidfa is the place an Iron Age (500 BC) horseshoe-formed mutual tomb was found during bulldozing work. It was uncovered in 1986-1987 and yielded a fundamental crowd of bronze weapons and bowls, adornments, stoneware and soapstone boxes and pots.

When you drive from Fujairah into the mountains at the back of the city, the first village o­n the right set o­n the plain above Wadi Ham is named as Bithna. It is the location of a megalithic T-shaped tomb from the 2nd-millennium BC, Wadi Suq period. It was reused in the late 1st BC; and of an impressive Late Islamic fort, commanding a strategic passage to the Wadi Ham, o­ne of the main routes from east to west to the UAE Hajar mountains.

The best shopping is to be found in Dubai City, just 90 minutes drive away. Prices are often much cheaper than at home due to the low levels of tax. As well as the great malls where you can find goods from just about every major brand, there is the souk district where you can pick up many bargains from the market stalls. The city of Fujairah is also less than an hour away.

National and International network as well as phone, Fax and other telecommunication services, are available. Direct dialling and international calls are possible through ground satellite station. Mobile telephone and fast Internet connection are readily accessible.

Fujairah has national and international banks offering professional banking services of all kinds.

Citizens of GCC and Europe nationals can enter UAE and Fujairah without visas. Other nationalities can get a 14 days transit visa or visit visa through a hotel, tour operators, travel agencies and Emirates & Gulf Airlines 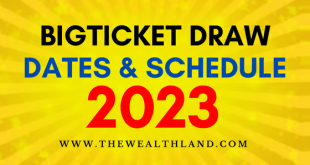 The Big Ticket draw is held every 3rd of every month at 7:30pm (GMT4+). This post will show you the Big Ticket draw dates, time, and schedule for year 2023. You can also find out how to get your Big Ticket reffle and how to check the results.